How to record audio for a live standup comedy show

Tony Deyo is a funny comic (here's his Conan set) who recorded his album himself in a bunch of locations. I asked him about how he did that and he kindly wrote up some details on how to tape a live show...

Recording Yourself in a Comedy Club

To get a good recording in a club, your best option is to you grab the audio signal before it gets into the comedy club's audio system. There's a high likelihood that you'll pick up some noise if you're recording the vocal mic out of a club's soundboard. You're also at the mercy of whoever wants to adjust something on the board during your set.

In the picture below, you'll see a box that says "Splitter" on it. When you get to the club, you unplug the XLR cable from their microphone, and plug it into the side that has two XLR cables coming out of it. Then you take a long XLR that you brought with you, I think mine is 20 feet, and you plug it into the mic, and plug the other end into the side of the splitter that only has one cable. Then, one more short XLR goes from the splitter to your recorder. I use a Zoom H4n, pictured below. What this accomplishes, is that you get a perfect clean signal right from the mic, before it gets dirtied up by whatever system they have in place. You can also sound-check yourself beforehand to make sure your levels are correct... and nothing that they do on the board will change that on your recorder. Now, in an ideal world, there's a little bit of space between your recorder and the audience, and you can just use the H4n onboard mics to get the audience laughs. Often though, the audience is too close... so that's why I put an extra Zoom H2n recorder behind me. It takes some syncing in your audio program later, but you'll get the hang of it quickly if you're going to do everything yourself. Even better though, just hand off the recordings to an audio engineer and let that person sync and edit. I learned all that stuff myself, but it's kind of a big learning curve unless you're just interested in learning it... and then it's super-cool. I mix and edit in Logic Pro X, which is pretty inexpensive now. $100... maybe $200, but not bad. The industry standard is ProTools, but it's expensive.

So that's my set-up. It's an easy set-up once you get the hang of it. And the great thing is that once you own the equipment, you can record yourself every night until you get that perfect set... instead of worrying that you're only paying a guy to record on Friday and Saturday, and you HAVE to get it perfect one of those shows. It's too much pressure. Get the recorders, a splitter, some cables, a mic if you're picky... and you're all set. Ends up costing what you'd pay someone to record you anyway, and you get to keep all of the equipment and record as many times as you need to get the perfect set. 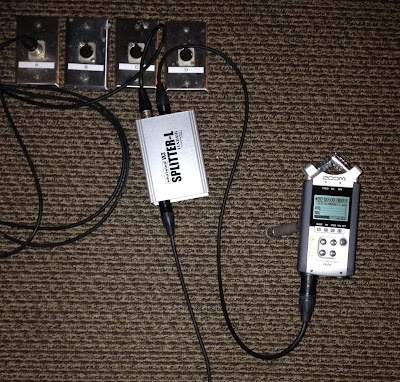