During his WTF interview, Louis CK talked about the outrageous "Nipples" sketch that launched (and perhaps doomed) The Dana Carvey Show. Here it is:

Louis C.K. had that notion. We had a simple sketch where Clinton was just—I thought Dana did a great Clinton, and I wanted to get it out there. Dana had a funny notion about Clinton trying hard not to laugh at the paltry competition that he faced in 1996. And then Louis separately had this funny notion that led to the breast-feeding, but it came out of a more subtle observation about Clinton: that he saw himself as this nurturing president. And at the time, Hillary was incredibly unpopular, so Louis had this idea that Clinton would, you know… It was more of a play on the “I feel your pain” act that Clinton had perfected by 1996. We weren’t all about, “Oh, this is gonna be gross, ha-ha, people are gonna be freaked out.” I took it too far. He had the breast-feeding idea, and then I came up with the multiple nipples and the puppies and kittens, because of my animal obsession that haunts me to this day.

Btw, here's the writing staff of the show. [via HS] 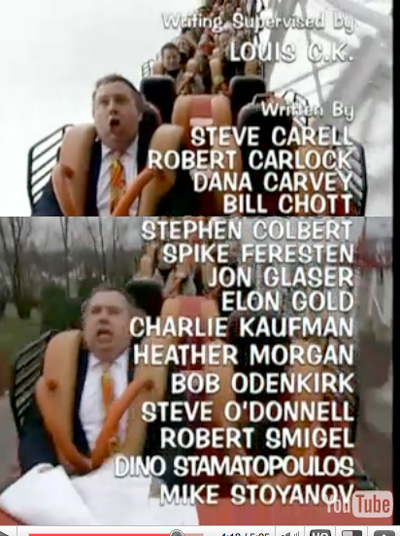 Thanks for sharing this vid. I find it very entertaining.