The other week, I did an hourlong set at a community college in Maryland. It was at 11am. In a cafeteria. For a, er, light crowd: 10 people in front paying attention, six more in the back playing Magic the Gathering, and another dozen people — off to the side in a different room — ignoring me and eating their lunch. I thought that was strange enough. But then, about 15 minutes in, the mascot of the school entered. In full regalia. And sat in the front row. This is him: 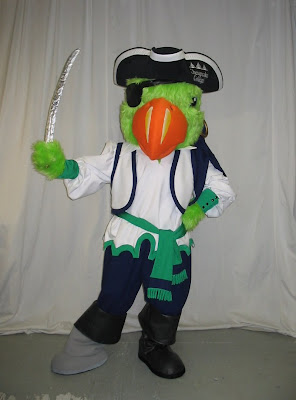 I asked the audience what the name of the school mascot is. They said a skipjack. I just looked that up. A skipjack is neither a parrot nor a pirate. It is a tuna.

I tried talking to him (e.g. "What animal does a parrot pirate have on HIS shoulder?") but he had a giant mask on and couldn't speak. He just did this weird slow-nod thing because I think that's all you can do when you're in a giant mascot head.

I then talked about how, in a way, all birds are really pirates when you think about it. They live pretty similar lifestyles, ya know?

It was really fucking strange. He sat in the front row for a half-hour – laughing? I have no idea – and then got up and walked out. As he slowly exited through the back of the room, I said goodbye and he waved back at me. It felt like the fade out of some sort of Donnie Darko/Hunter S. Thompson/Pirates of the Caribbean fever dream.

Sometimes comedy is a pretty decent replacement for psychedelics.
at April 12, 2011

Email ThisBlogThis!Share to TwitterShare to FacebookShare to Pinterest
Labels: about standup, best of, material