The lifecycle of a bit

You'd think that a joke just slowly gets stronger. But I've noticed a lot of times a bit will fly at first and then die a slow death. 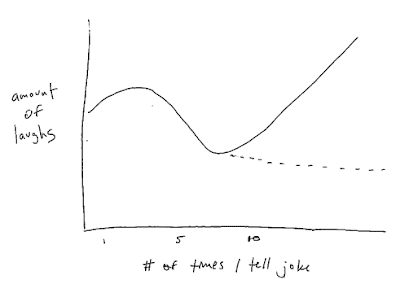 Maybe it's cuz I'm excited or it doesn't seem so rote or something during those first few stabs at it. But once I settle into the bit, it often starts to feel less funny. More like I'm going through the motions.

That's when it's either make or break time. Push through that downturn and it's a keeper. Other times, it just fades away. Sometimes I'll put it to bed for a couple of months and then come back to it. The fact that something about the bit sticks in my craw is a sign that it's worth paying attention to again.

Also, it's mostly about content the first few times I tell a bit. After 10+ times, that's when I start to really think closely about the finer points of my delivery — adding some physicalness to it (not my strong suit admittedly), the rhythm and pauses of what I'm saying, changes in tone/volume, etc. Before that, I'm more worried about the words I'm saying and if it's even worth keeping.
at March 26, 2010

I've noticed the same thing. My killer jokes get less laughs over time and I'm not sure why.

Have people heard them already? Am I just phoning them in? Is my newer material better than the old killer joke? Is there something funny about my nervousness when I tell a new joke?

Sometimes I perform an old joke and have no idea why it's funny anymore, yet people are laughing.

Matt, so what's the key to keeping a joke fresh? Maybe have a rule like: Have at least one edit (new tag, remove tag, edit text..) each time you perform an older bit? Would that keep us on our toes as we perform and subsequently, keep it fresh?

One of the reasons a killer bit stops working is that the performer gets cocky and expects a laugh every time. The trick is not to show disappointment verbally or facially when this happens. Also, often times when a bit isn't working, it means you're trying too hard. Watch some earlier tapes of your shows to see what is missing. For the open-miker: After two weeks of performing a bit, all of the other open-mikers become familiar with it and won't respond with laughter. It doesn't make the joke any less funny.

Sometimes it could just be about expectation and bad memory.

Like, the first time you try something new, you have no expectation of it even working at all, necessarily. So when it gets ANY positive reaction, you're like, "Hooray, I did it!"
Then the more it keeps working, the more you expect it to work (not necessarily because of cockiness, though maybe), so like any drug addict knows, you'll need it to work better and better to experience the same high of it working like it did that first time.

Point is, you're a drug addict.


PS If you're actually measuring laughs objectively with a laugh-o-meter or what not, then I guess this psychological explanation doesn't hold as much water. But it was fun writing it.

If you didn't like it, read it again a few times, and I promise it won't seem AS bad as you were expecting it to, based on the first negative impression.

Myq, you forgot to explain what bad memory has to do with it.

Phil, "Sometimes I perform an old joke and have no idea why it's funny anymore, yet people are laughing." LOL.

Neil, I love your point about rolling right through it. I did a 2-week old joke that had been doing well, that was now getting silence. Mid (physically mimed) act-out I said to myself, but out loud, "Laughter goes here," but the silence of the audience said, "Is that so?"

Sometimes it's funny to point out, "This was the punch line that you missed," and sometimes it's not worth drawing attention to it, because the crowd will tell you, "Oh no, we got it. We didn't want it."

I've definitely had the experience of a joke losing steam after a while. Some quicker than others.

Recently, I had what I thought would become a strong bit. Worked great the first time, second time it ate literal shit, and by "literal" I mean "metaphorical." But I don't think it failed because the bit was bad, I think it failed because the performance was bad. "User Error" would be a good euphemism. I went up and immediately felt a weird energy coming from the crowd, which means that I was the one with the weird energy. And then the rhythm and timing was off. The only laughs I got were riffs on how glad I was that I chose to do that bit.

Those first few seconds are so crucial in conveying confidence and positive energy. I see it in the comics who've been at it awhile and get consistent laughs and I look forward to the days when I have it consistently or at least the ability to fake it when I need to.

Those first few seconds are so crucial in conveying confidence and positive energy.

Hank, right on. Also, you sound like The Dog Whisperer.