A shitty room is an opportunity to take a chance

Don't get me wrong, performing a killer set in front of a hot crowd is great. But sometimes a weak show with a small crowd can be the most fun to perform at. There's less pressure. You don't have to go entirely with stuff that works. You can play. You can experiment. You can be conversational. You can stumble into things.

I did a show a few weeks back in the East Village. Not much of a crowd. Maybe ten civilians and five comics? And they were all spread out throughout a big room. I went up fourth. Things were pretty mellow. No one really killing but no one eating it too bad.

Just doing a rote set of established material would have felt like a lie. Like I was ignoring the state of the room. When there's that little energy in the room, I'd rather take a gamble on hitting a spark from riffing or trying something new. Plus, I view it as a chance to stretch and learn and get better as a comic. Just doing bits that always work doesn't really teach you much.

It's a strange thing when you start winging it with the audience. You're not giving them your best performance. But you're showing them respect, in a way. You're trusting them to go with you a bit. And maybe you can connect on something fresh and in the moment and really go somewhere with it.

So that's what I tried to do, while weaving in and out of jokes along the way. I riffed on the previous comic, I talked about the room, I did some newer bits and tried new tags, I went off on unplanned tangents. I'd get some laughs, then I'd lose 'em, then I'd go back into a bit, and then I'd go off on a tangent again, etc.

I actually recorded the set and — while stranded in the airport recently with nothing to do — decided to do a breakdown of it. Graphics! 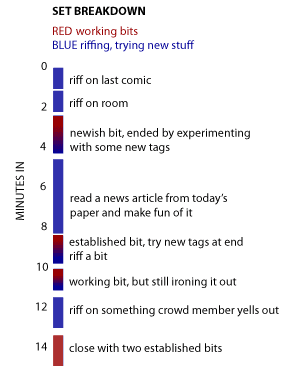 The more I winged it, the less I got laughs... 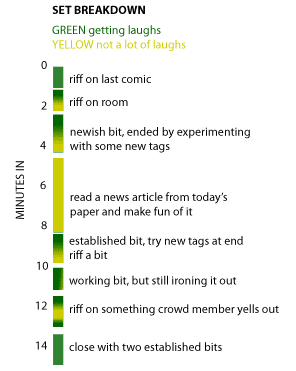 If this was a big show or a place where I wanted to really impress, the ratios would be pretty much the opposite. I'd do almost all written stuff that I know works and then just riff a little bit here and there if it felt right. The laughs would be bigger and more consistent.

But this way was more fun for me. At least that night. And I think for the crowd too. I felt like I "had them." When something off the cuff did hit, it felt a little magical.

There's a tradeoff with winging it. You lose consistency, but you can hit highs you'd never reach otherwise. And at least every once in a while, it's worth walking that tightrope to see what happens.
at March 11, 2010

Whoa, sounds like a great gig!! I recently did a show for around 6 - 10 people at Ochi's Lounge, and it was definitely the most fun I've ever had. I'm happy to perform at big, popular shows, but at this point in my career, I would particularly love to do very small rooms.

I hope that even if I should ever end up becoming a mega-superstar successful comedian, I will always look at a small room as a gift.. Figuring the big rooms I normally do (in this fantasy) are the regular part of my career, and small rooms are a chance to stretch out and simply "have fun".

totally agreed . There's something magical when you go off piste and you get a laugh .The audience really appreciate that you took a risk and were totally in the moment .

Graphics! Nice insight. I sent you another version of this chart that makes results a little easier to see.