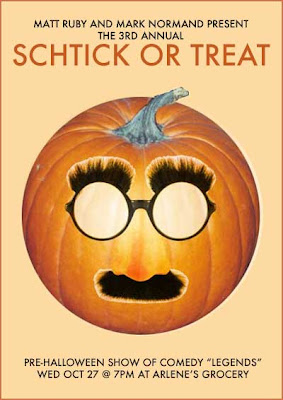 Here we go again! The idea: It's a quick turnover night where 30+ NYC comics get up to three minutes to do a set as a famous comic...and then it's on to the next performer. Standing room only two years in a row – def one of the funnest shows to watch.

Email ThisBlogThis!Share to TwitterShare to FacebookShare to Pinterest
Labels: schtick or treat, shows

Robert Schimmel? I thought I had Jimmy Kimmel. There go all my Uncle Frank jokes. I should have just done Sarah Silverman. Why do I make it so hard? Last year as Sinbad I wore a Steve Harvey wig that looked like a Hamid Karzai hat.