Escape hatches, showing your notebook, and how to craft an act

Chris Hardwick wrote a piece for Wired a few months back called Crafting a Joke: The Arc of an Act. It's a good/quick read with interesting quotes from other comics along the way.

B. J. Novak says comedians naturally gravitate toward the laughs. “Only say what you think is funny,” he says. “Only keep what they think is funny.”

Jim Gaffigan says he and his wife spend hours ripping apart a topic for jokes. “There can even be some that aren’t A’s, but within the context of other jokes they can survive. That’s how George Carlin did things,” Gaffigan says. “It’s about getting all the chicken off the bone.”

Bob Newhart builds “escape hatches,” he says. “If I get past the first bail-out point and the routine is still working, I go to the next.” Paul F. Tompkins says, “I let the actual phrasing of the idea come to me onstage, to keep it as conversational as possible.”

"Escape hatch" = good way to put that. Those extra tags can sing if the crowd's up for it. But if not, you're best off bailing while you still got 'em a little bit. Can totally see how Newhart would need some exit points in his one-sided phone call routines.

Hardwick also advises, "Never analyze comedy in public. It makes you look like a douche." I agree. This whole blog is one giant exercise in me looking like a douche.

Over at his Nerdist.com blog, Hardwick mentions the toughest thing for him about the piece.

The toughest thing for me with this piece was allowing my stand-up notebook to be photographed. A comic’s notebook is half Tome of Spells and half diary, but like a child’s drawing it only makes sense to the artist. I always fear that if I leave it in a hotel room, whoever finds it is going to misinterpret its disparate ramblings as those of a serial killer’s (I have the words “Grandpa Soapy Handjob” sloppily written down. I have no idea what it means.). I would almost rather have had my penis photographed than my notebook. I think the below picture is the comic’s equivalent to that first Playboy shoot for a corn-fed Midwestern girl–I’m allowing the world to see my soul’s tits.

Here's the shot of his notebook: 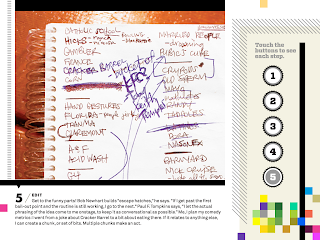 Here's a page from my current notebook. I usually keep set lists/stuff to try at shows on the left side and random ideas on the right. "Sometimes trying new stuff is your only reward" How true is that? lol. Ahhhh, comedy

Thanks for that Wired Article, it's really interesting. I have also thought alot about escape hatches.

Sometimes I feel torn about building escape hatches in a set because it might make it too easy bail on a bit before its had a chance to breathe onstage.

I can very much relate to Hardwick's fear of someone finding his notebook and misinterpreting it/not knowing what it is. Just today, I started to write out a bit on a sheet of paper at work, thought I had put it in my pocket, and later realized it wasn't there. I walked by the co-workers desk I was just at and saw it sitting on top of a pile of papers. Really humiliating, panicked feeling. People reading your random joke ideas can be bad enough just because of how underdeveloped a lot of them are, but its even worse when they don't know that the things they're reading are intended to be joke premises.