If you've just found this site due to the Gawker.TV piece: Welcome! If ya dig what ya see, subscribe to the site or my email list to stay in touch.

"I Need Laughs," the documentary I made about performing comedy in NYC, is featured at Gawker.TV today.

Filmed in a conspiratorial style, with low contrast, shrouded profiles, and the documentarian's face either obscured by darkness or cut off altogether in many of his solo confessional scenes, I Need Laughs blurs the line of demarcation separating performer and audience. Performance scenes shot from the backs of rooms, flanked by silhouetted audience members or from behind half-empty glasses of booze give the viewer a sense of being let in on a secret.

(Btw, R.G. Daniels once described it to me as the Serpico-ish version of Seinfeld's "Comedian." Sounds about right.) 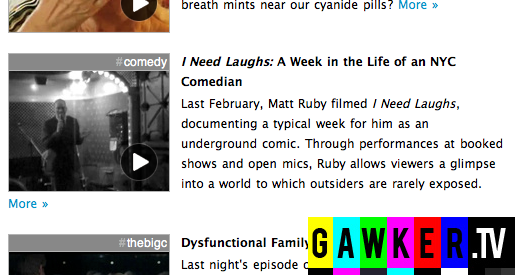 The post also includes some kind words about this here blog too. Big thanks to Rebecca V. O'Neal for the nice writeup.
at October 06, 2010

Email ThisBlogThis!Share to TwitterShare to FacebookShare to Pinterest
Labels: about standup, videos

Hey Matt, I'm glad your doc is getting some publicity, I really enjoyed watching it and reading your blog.

I recently started a blog on stand-up comedy that is partly inspired by your work here, though definitely a different style Premise PUNCH Tag

nice !! that is awesome . Should be a huge boost for the site!

Rad. I love this era in comedy.