GhettoMyspace and the world of merch

Dan Goodman is a funny comic. GhettoMyspace is his pet project that explores the underbelly of MySpace. It's pretty hilarious.

GhettoMyspace.net, recently featured on Tosh.0, is a site dedicated to real photos from people’s myspace profiles. On this site you will find kids with guns, drug dealing, ghetto booty, hood funerals, and in general people having a great time. May we all have as much fun as the people in the pictures.

Now he's selling merch that uses images from the site. His room is filled with boxes of GhettoMyspace clothes. I asked him what it's like to go into the merch biz. Here's his answer:

Welcome to the Adult Learning Annex:

Below is a picture of the room I sleep in. It is now full of boxes of GhettoMyspace clothes. There's something really funny about sleeping next to your debt. I think it would be harder to get deep in debt if you actually had to sleep next to large heavy boxes. Like for every thousand bucks you owe the credit card company they would send you a giant box full of weights. Every time you send in a payment you would send it in with a proportionate amount of weight. That's actually where I'm at living with these boxes of clothes. Every shirt I sell gives me more room.

This all started innocently enough. Like everyone else I'm trying to figure out how to make money off the internet. After GhettoMyspace.net started to get some national attention (Tosh.0, Bossip, Death and Taxes Mag), I asked around and everyone else who I knew making internet money was doing it with merchandise.

Here's where my own business failings step in. I get it in my head, I don't just want to make crappy promo merch, I want to make nice clothes. Great idea, but nice clothes are expensive, and I know nothing about starting a fashion line. The whole thing cost me way more than I thought in my obsession to get it just how I wanted it. If I sell all those these clothes I can do another run where I'll actually make money. Until then I am selling clothes just to get out of the hole and make room in my apartment. The attached picture is how I wake up, in sheer terror. The only saving grace is the clothes are awesome.

My whole time in comedy has been spent trying to be successful doing only what I think is funny. When I finally made a compromise I still fucked it up. I decided to get crazy high standards for something nobody has standards for, after show merchandise. I don't know how it's going to turnout, but at least my name with be on something really funny which is worth more than a couple grand.

Buy a GhettoMyspace shirt and support a hairbrained scheme. If we all supported more clueless dreamers and their goofy ideas the world would be a lot less dull. Besides where else are you gonna get a tshirt that has a baby with a gun on it. 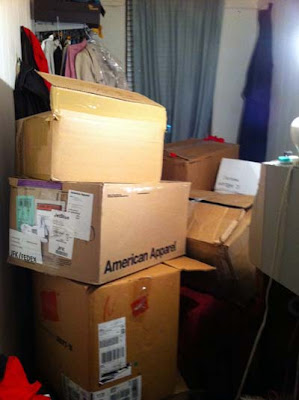 I have a lot of soce t-shirts. I sell them online and when I tour, and I give them away at Positively Awesome shows.

I also have a lot of soce stickers.