Why Seinfeld took Leno's side over Conan

In The B.S. Report: 11/10 (a podcast), Bill Simmons has a revealing talk with "The War for Late Night" author Bill Carter about Conan, Leno, and Letterman.

Carter says Seinfeld took Leno's side because he felt "[Conan's] youth movement thing was against the old time comics." He summarizes Seinfeld's view this way: 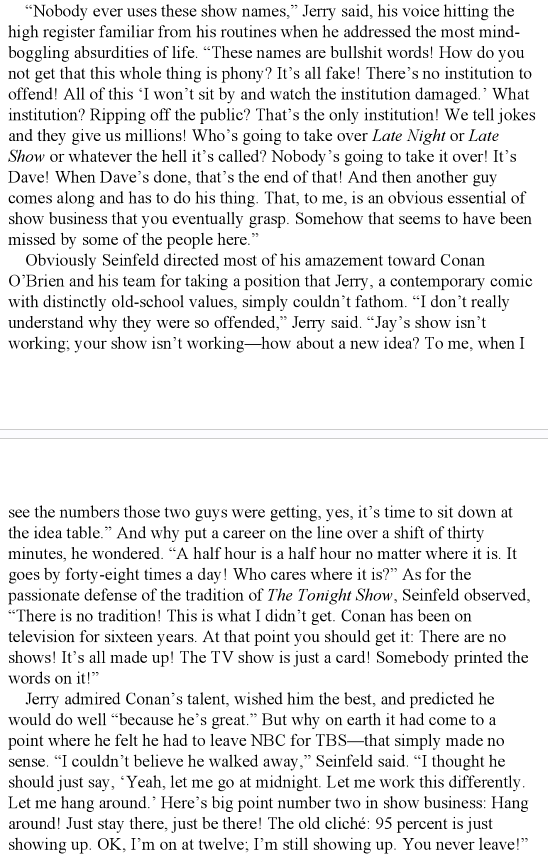 Carter ends the section by describing Seinfeld's frame of reference this way: "Jews do not celebrate martyrdom."
at December 09, 2010

Finally someone agrees with me on this late night thing, very pleased it happens to be one of my idols. conan is great, but he handled this wrong.

I like to imagine a world where Conan made ratings history on cable creating the new best platform to showcase stand-ups, Leno donned his blue jean shirt to host a hilarious web show about car expertise called "Denim's da Brakes", and history was made as a young, unknown, comedy writer named Abbi Crutchfield was passed the torch on the Tonight Show. And promptly turned it into an infomercial featuring products for curly hair.

Jay's a jerk, and so is Jerry.

Finally a grown up has come in and told the children what happens in the real (or in this case fake) world.
I love Conan, but Jerry is right here. The "shows" are B.S. the only thing that matters is the guy. And one other thing, ratings (and demographics) are ALL that matter.