The Marshall Tucker Band, Three Inch Fury, and me

Tonight at 8pm I'll be performing at Crime & Punishment with Kate Berlant at Cakeshop. Afterwards I'll be doing a spot at Giggles at Bruar Falls which always has awesome posters: 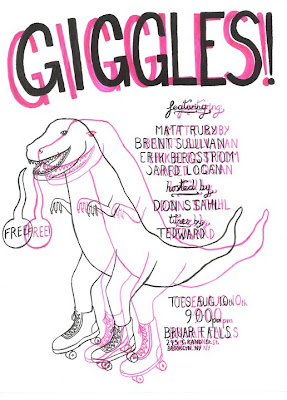 On Friday, I'll be hosting HOT SOUP at 8pm at O'Hanlons. The lineup this week:

And on Saturday, I will be upstate opening for fireworks. I'm doing comedy before The Marshall Tucker Band hits the stage at this: Fireworks Over Utica.

Mark your calendars - Saturday, August 14, is the second annual "Fireworks Over Utica" celebration, which will take place at Hanna Park outside of Utica's City Hall.

"The people love it, especially in a time when people can't travel as much as they used to," Mayor Roefaro said. "Here, we give them something to do, right here in Utica, New York, that they can enjoy and come to. And these are the quality of life things we like to portray here in Utica."

Local bands will be performing starting at 3 p.m. on Saturday August 14 at Hanna Park. Among the local bands scheduled - Slug, The Watch and Three Inch Fury.

The local bands will be followed by The Marshall Tucker Band.

All ages crowd, outdoor stage, performing between rock bands and before fireworks...sounds like the perfect environment for comedy! Too bad I have to stay clean. Otherwise my opener would totally be about how I'm mad at Three Inch Fury for stealing my penis' nickname.

Btw, the MTB sounds fun but I'm even more psyched for Three Inch Fury which is "Central New York's EXCLUSIVE 80's METAL Band!!!" You can hear their version of "Unskinny Bop LIVE" at the band's Myspace page.

Is my excitement to see 'em ironic or sincere? I have no idea! But if they play "Love Song" by Tesla, I might lose my shit. LOVE IS KNOCKIN' OUTSIDE YOUR DO-OH-WHOA-OH-OR!
at August 10, 2010

While you're in Utica, be sure to drink some Utica Club (cases used to go for about $6.99) and eat at Grimaldi's if you want a mafia Italian experience. I can't believe that I sort of miss central NY. Have fun! :)
-Selena