Things that comics do that rub me the wrong way 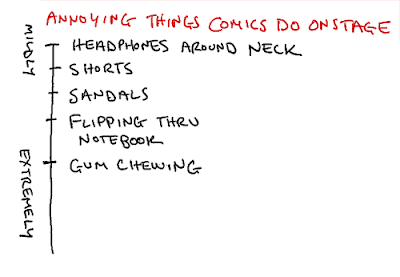 I wear shorts sometimes when it's super hot. I hate doing it but goddamn is it too f'n hot sometimes to be professional. Ya got me!

Nick, you are exempt. With legs like that, you pretty much have to show them off.

Do comedians ever go on stage wearing headphones? I have seen that exactly once -- from a comedian who was also playing a DJ, so it made sense. That doesn't sound like a real thing, honestly.

(But if true, it would be several times worse than a comedian wearing shorts and/or sandals, which might be a thing that comedian actually wears. There's no reason why a comedian wouldn't be able to take of his/her headphones.)

ECN, it ain't super common but I have seen it multiple times. Lots of subway riding in NYC means lots of iPod listening...etc.

While I agree with the chart, I think you just became a cranky old man today.

Matt, I was picturing the giant can headphones, but I don't find those as annoying as the tiny iPod headphones. Now that you mention those, yeah, I see those a lot as well, and they do get annoying. I also find it annoying that this is my first post on your site and it's about headphones.

Abbi, I've been a cranky old man since infancy.

Btw re: shorts, last night a few people asked me, "But what if it's hot?" Well, let's say you're starring in a play. Is it ok for you to show up onstage as Hamlet wearing shorts just 'cuz it's hot outside? I feel it's a respect thing with the audience.
But hey, I think Vecchione was actually chewing gum during his Tonight Show set so what do I know?

Note to self: do not dilly dally on Hot Soup. Speak up, mind my p's and q's, close the door and quit making so much noise.

Totally Matteson, the cellphone is the worst and deserves to be on here.

wearing flip flops and saying over and over "What do I want to talk about?"

Does it matter if they're super funny? I.E. Patton Oswalt in shorts and flip flops?